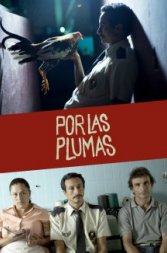 All About the Feathers
Costa Rica, 2013, 85 minutes, HD Comedy
All About the Feathers, a sweet and Sisyphean comedy from Neto Villalobos, operates by the premise that there’s little in life funnier than watching awkward everyday people simply being their semi-normal selves. Social exchanges between lovable losers are nudged slightly off-kilter, providing a recognisable inelegance to situations that are mundane, bizarre or, if it’s possible, both simultaneously. It’s a very ‘indie’ form of deadpan humour that film fans of the English-speaking world are likely to associate with the output of early-years Wes Anderson, Jared Hess or even, to trace the lineage back to a more inherently ‘Hollywood’ example, Buster Keaton. All About the Feathers’ delivery is more low-key than any of those examples (in that light, you can maybe add Jim Jarmusch to the above list) and there will likely be some who sit through the whole film wondering where all the jokes are, but those predisposed to this variety of misery-based character comedy will find themselves in good hands.Our unconventional protagonist is Chalo, a bored, lonely and naïve security guard seen regularly pestering a local cock fighter to buy his prized rooster, thinking that the scrappy bird could be his ticket to some easy money. Chalo finally succeeds in getting the rooster after stumbling upon some leverage against the owner but the bird, eventually named Rocky, proves to be more of a burden than an asset, getting Chalo thrown out from his accommodation and putting his job in jeopardy.On the brighter side, the bird acts as a catalyst by which new friends are brought into Chalo’s life. The most consistently amusing of the bunch is co-worker Jasón , a surprisingly sympathetic goofball with a delinquent past (and whose name the character insists is not pronounced ‘Jason’). In a film filled with entertaining chemistry between characters, some of the funniest interactions occur between Chalo, Jasón and their boss David who has little patience for Jasón’s ineptitude. Chalo also forms connections with Candy, a proactive housemaid who has her own moneymaking scheme selling Avon products, and a friendly teenage boy named Erlan, the sort of character to start a conversation with a complete stranger on the bus with the barely prompted question, “Do you like moustaches?” Erlan, Candy and Jasón form a loving surrogate family for Chalo with Rocky as their surrogate child – albeit a child that fights other children for prize money.In a typical occurrence of the amusingly underwhelming, Jasón recalls the Bible story of the rooster that crows after Peter denies Jesus. Any point Jasón may have been trying make is lost in his sloppy storytelling, explaining the events out of order and sometimes repeating himself. It’s a scene that’s echoed in a later conversation, where he gives some rather muddled directions to his home, and it serves as a pretty good microcosm for the film as a whole and its (intentionally) rambling nature. Calling to mind the famous Macbeth line that life is a tale told by an idiot (which would be a harsh but not entirely unwarranted way to describe the goodhearted Jasón), it consequently seems appropriate, if still a little limiting, that the film doesn’t amount to any grand statement beyond its pleasing sense of companionship. With the warmth and wit by which All About the Feathers ambles through its various tangents and anti-climaxes, it’s hard to imagine a more focused, thematically driven version of this story being this much fun to watch.
Like this Review?
Write your own review?
DooVOTE
Not for me
Like this Review?
Write your own review?
COMMENTS 1
Your Comment...
LIKES 2
MaeMaeDecena
sharonmae
MaeMaeDecena
sharonmae