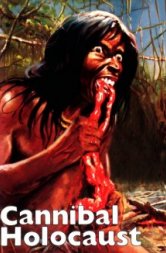 Cannibal Holocaust
Italy, 1980, 95 minutes, HD Adventure, Horror, Classics
Well I finally got around to watching Cannibal Holocaust. I had been aware of this film for the past thirty years but had never made any attempt to actually watch it. It just sounded too repulsive. Well, as I say, that is until now. The reputation of this movie goes before it and its plot line is so well known that I just don't feel the need to go over it again. What I will do is simply give my emotional reaction to it. I think this is justifiable simply because this is a movie that assaults you. I can't honestly say I enjoyed it, I would say more accurately I endured it. As many probably know, many of the films from the video nasty list are amazingly light-weight and inoffensive. Well this one isn't in that category. This is a very nasty and mean-spirited affair indeed. Interestingly, its director Ruggero Deodato was responsible for the other film on the video nasty list that is closest to Cannibal Holocaust's level of repulsiveness and that was The House on the Edge of the Park (1980). That one has a draw-droppingly excessive amount of sexual violence and it's overall extremely disturbing. Both films make you feel somewhat dirty for having watched them. I suppose you have to say that Deodato is a very uncompromising director indeed. These are films not for the not-so-easily offended. Many horror fans will find them too exploitatively nasty.

Cannibal Holocaust shares the very repulsive sexual violence of Park but it brings in two other key ingredients, namely an underlying social commentary and the infamous animal slaughter. The latter is a feature of the Italian Cannibal films in general and it really makes for diabolically horrible viewing. It's a pretty low way to shock audiences by shooting a pig – okay you've got our attention but where is the skill in that. In fairness, even worse things happen in slaughterhouses every day but there is just something particularly nauseating about the gloating nature of the turtle scene, with the characters goofing around with the poor beast's severed head for the camera. All of the excesses of the movie mean that the social commentary is somewhat lost in the mix. The idea that the media exploit events for their own gain is most certainly one that carries some weight, particularly in the case of the Italian 60's Mondo movies of which I am sure were a big influence on this film. But it's so very, very hard to get past the extreme violence.

How to rate Cannibal Holocaust? It's one of the most difficult films for me to score because this is a well-made film and it has definitely sickened me and that was the intention. But much of the experience for me was a negative one where I felt somewhat debased actually watching it. So I have settled for a middling score that reflects the skill and originality of this genuinely troubling movie but which also acknowledges that in many other ways I was appalled.
Like this Review?
Write your own review?
DooVOTE
Not for me
Like this Review?
Write your own review?
COMMENTS 0
Your Comment...