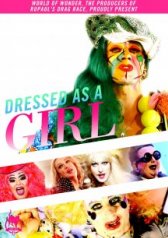 Dressed as a Girl
UK, 2014, 94 minutes, HD LGBT, Documentary
The outlandish performance artists of East London’s alternative drag scene are no strangers to personal struggle. As Colin Rothbart’s rapturous new documentary Dressed as a Girl demonstrates, the stage personas of Jonny Woo, Holestar, Scottee and the rest of the gang were born both in opposition to and as cathartic expressions of private hang-ups, often stemming from troubled upbringings and old-fashioned stigmas. Their routines dramatise serious problems with bold glamour and self-deprecating humour and, across the six years he chronicles, Rothbart depicts the lives of these eccentric individuals with a similar relation between the two sides of the stage curtain. He isn’t afraid to venture into the upsetting territory of HIV and addiction but the film as a complete piece is executed with enough fun, freewheeling momentum to ultimately amount to a mindful yet life-affirming celebration of art.

It seems true to life and true to the desired mood that the film isn’t exactly laser focused in its narrative progression, moving between the lives of its various subjects with a vague sense of parallelism. Some continuity is provided by the occasional piece of narration from Jonny Woo (presented here as something of a ringleader for the scene) but, while this device can be slightly over-explanatory in the first third, it soon eases up, allowing the film a longer leash for a more stylistically unbridled experience. The anarchic messiness pays off with a film that’s much too enjoyable on a scene-by-scene basis for anyone to worry about where it’s all heading.

That’s not to say, however, that Colin Rothbart’s warm examination of these lives is inconsequential. In its footage of a lonely, neglected Holestar – fresh out the hospital, stuck at home due to an injury and abandoned by the pack – the film shows an awareness of the pitfalls of getting too caught up in the surface sheen of the theatrics. Meanwhile, trans woman Amber’s rocky relationship with her father demonstrates how the problems and tensions of the coming out years can still persist. More worryingly, the once active Pia’s withdrawal from the scene and into her own New World Order conspiracy theories provides a striking example of how personal demons can sometimes win out in the long run.

These sobering moments amongst the jubilant chaos provide the necessary weight to elevate the film above the level of simple escapism. Colin Rothbart isn’t just a fawning fanboy but a filmmaker intent on getting to the core of what makes these theatrics energising and important for both performer and spectator. By revealing the underlying darkness of these tumultuous lives while still keeping its sense of humour and adventure intact, Dressed as a Girl succeeds as a tribute to the alternative drag scene that will likely make its own partakers proud.
Like this Review?
Write your own review?
DooVOTE
Not for me
Like this Review?
Write your own review?
COMMENTS 0
Your Comment...