Image from: The Designated Victim (1971) 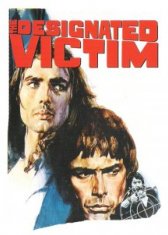 The Designated Victim
Italy, 1971, 105 minutes, HD Thriller, Giallo
This Italian re-working of Alfred Hitchcock's Strangers on a Train (1951) has Tomas Milian star as an immoral advertising executive who is frustrated with his wife's refusal to sell their business. Angry that he won't be cashing in any time soon, he goes on a trip to Venice where he has a chance meeting with a foppish aristocrat who looks like a cross between Russell Brand and Laurence Llewellyn-Bowen. The two of them make a pact where Brand-Llewellyn-Bowen will kill Milian's wife in return for the latter murdering the former's brother.

In its early stages The Designated Victim looks quite promising. The scenes in off-season Venice where Milian meets the Count and his mysterious lady friend are quite unusual and atmospheric. Unfortunately, the odd lady friend vanishes from the scene leaving Milian and the fop to lead the picture. You will sort of know roughly where the story is going if you are even vaguely familiar with the Hitchcock original. But it's not predictability that's the problem here; it's more the fact that there is a serious lack of suspense and thrills. The film drags for the most part and the dynamic between the two central characters isn't as interesting as it should be. I couldn't really wholeheartedly recommend this one. When you consider the other Italian thrillers on offer in the 70's, this one pales quite a bit by comparison.
Like this Review?
Write your own review?
DooVOTE
Not for me
Like this Review?
Write your own review?
COMMENTS 0
Your Comment...