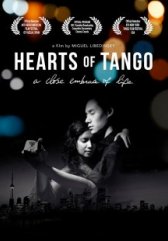 Hearts of Tango
Canada, Argentina, 2014, 64 minutes, SD Documentary, Music
“When you’re dancing tango, you are managing five relationships at the same time,” observes one of the many dance enthusiasts and theorists interviewed in Hearts of Tango, the celebratory new documentary from Miguel Libedinsky. “You have the relationship with the ground, the relationship with your partner, the relationship with your music and with everybody else on the dancefloor,” the interviewee continues, “And the most important relationship…is the relationship with yourself – and, when you find that, it’s pure heaven.” The divine interconnectivity suggested by these words runs through all 64 minutes of Libedinsky’s film in both form and content. It’s the sturdy backbone of a film that gets more thematic mileage than you might expect from the current tango trends in Toronto. The dance is presented as an expressive meeting point of personality, tragedy and triumph – a therapeutic blending of lives, and all the culture, history and individual experiences that these lives bring.

Artistically, there’s no obvious reason why Hearts of Tango needed to pick Toronto as its setting, especially given the worldwide phenomenon that is its subject. But, in the film’s sporadic exterior shots, the city becomes its own overarching character, enhancing the continuity between the various anecdotes, musings and practices of its occupying tango scenesters. One interludial mid-film montage is particularly exuberant in tying tango to the vibrant life of Toronto in general. Further aided by Carlos Libedinsky’s acute, tonally malleable soundtrack, the film reflects the instinctive, improvisatory nature of the dance in its fluid, spontaneous transitions between people and issues.

Tango acts as a prism through which lives and ideas are studied. One happy relationship is presented almost as an expansion of the tango classes through which they met. A woman in a wheelchair uses tango as a means to challenge perceptions of disabled people as an non-social group disassociated from tenderness and grace. Tango is connected to other arts, such as music and photography, and its technical aspects are illustrated with several tools, from an electrical appliance that reads weight concentration to a sculptural diagram of the correct posture fashioned from a wire hanger. But while tango is demonstrated to hold a spectrum of meanings depending on who you ask, there are, nonetheless, underlying shared experiences of the dance that link people intimately.

At the same time, the film is sure to highlight the divisions that characterise the field, both externally and internally. Miguel Libedinsky makes a distinction between everyday social tango and the more exhibitionist forms of stage tango depicted in pop culture, with the latter’s intensely romantic connotations further alienating outsiders who are already made uncomfortable by the dance’s physical intimacy.

Meanwhile, the dancers themselves are split between the traditionalists and those looking to incorporate modern and experimental elements into the music and performances. There are those who observe how tango was started by the oppressed lower class but was picked up by the ruling class who imposed rules and regulations on the practice, and connect this to a current friction between the spontaneous and disciplined faces of the dance. There are also those who lament that tango has now become exoticised and colonialised by North American and European cultures, while others warn against keeping Tango boxed in by its Argentinian roots. Again, this discord is tied in with the interconnected nature of the dance itself, finding a certain harmony in these conflicting elements.

A final connective quality that Hearts of Tango attributes to its subject is its relation with history. The film may well have benefitted from lengthening its very concise running time to explore this particular avenue further, potentially granting the picture a rich new dimension of emotional heft and social relevance. Then again, tying tango too much to one historical narrative may have also hindered the joyous subjectivity that Libedinsky gets across. Quoting renowned Argentine dancer Carlos Gavito, the film offers the notion that “Tango was an immigrant music, so it does not have a nationality.” Hearts of Tango justifies this statement with its inviting mix of enlivening discourse and uplifting universality.
Like this Review?
Write your own review?
DooVOTE
Not for me
Like this Review?
Write your own review?
COMMENTS 1
Your Comment...
LIKES 3
starlightgal
AttilatheHan
MaeMaeDecena
starlightgal
AttilatheHan
MaeMaeDecena