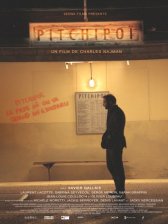 Pitchipoï
France, 2015, 100 minutes Comedy, Drama
With its sombre colour scheme and historically loaded subject matter, Charles Najman’s Pitchipoï is hardly a film that screams ‘absurdist comedy’ at first glance. But as the film ventures into increasingly unpredictable, odd, challenging and sometimes downright confounding territory, it starts to resemble a trippier version of the Coen Brothers at their most cruelly strange and rambling, from Barton Fink to The Big Lebowski to A Serious Man, or even one of Bob Dylan’s socially aware tall tales from the mid-‘60s (see “Bob Dylan’s 115th Dream”). While Pitchipoï’s rough-and-tumble sensibilities guarantee that it won’t be to everyone’s taste, the film’s gradually mounting structural anarchy will prove poignant and entertaining to the predisposed viewer. It’s a darkly comic free jazz solo of a film where the past and present of the Jewish identity collapse into one.

The film’s story – if you can call it that – is told from the perspective of Julien, a bitter, obnoxious comedian who jokes cynically about his Jewish heritage and the current situation in Israel. Pitchipoï maintains awareness of the role of humour as a coping mechanism but also depicts how it can be used as a tool of defence, evasion and self-denial. This is clear in Julien’s conflicted feelings towards his recently deceased father – a Polish Jew who survived the concentration camps – and his mysteriously missing brother, Pierre. After an unseen individual pretending to be Julien sets up our protagonist to be a figure of controversy, Julien fears that his rocky past with his brother is finally coming back to haunt him. He becomes the inadvertent subject of international concern and suspicion from various shadowy groups involved in influencing the movement of Jews and Israelis (a relevant distinction), with some individuals promoting Aliyah (immigration to Israel) and others holding up Poland as a new promised land.

As Julien becomes progressively more unhinged and paranoid, the events around him in turn get ever more bewildering. After a while, you may start questioning just how much of what you see is actually happening and how much is going on in Julien’s head. After a little longer, the distinction stops mattering so much. This is a delusion told from the inside out but one characterised by genuine guilt, displacement and the sting of unfulfilled post-war promise. By the time our hero is being chased through the streets by a mob with flaming torches, it’s probably best to abandon any attempts to draw a literal reality from what you’re seeing and instead appreciate the implications of Julien re-living some of the waking nightmares of his deceased ancestors.

Pitchipoï’s reserved style has trouble keeping up with its off-kilter form, mismatching some fairly conventional direction to a script that’s too dense in its strangeness to feel like much is at stake on a traditional dramatic level. Nonetheless, the film succeeds on levels socio-political and broadly abstract, capturing widespread cognitive dissonance and observing complex relationships with past tragedies and misfortunes. The farcical nature of the film’s reality acts as its own kind of labyrinth which Julien must navigate while at the mercy of opposing forces bigger, more committed and more ludicrous than himself. “Whose side are you on?” our poor schmo of a lead is asked after another trying and perplexing episode. His answer sags with comic bewilderment and weary resignation: “Mine, if that’s still possible.”
Like this Review?
Write your own review?
DooVOTE
Not for me
Like this Review?
Write your own review?
COMMENTS 0
Your Comment...