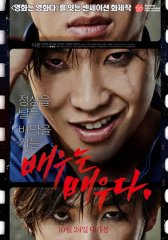 The film follows the meteoric rise and fall of unknown actor Oh Yeong, played by K-Pop heartthrob Lee Joon, as he discovers overnight superstardom and becomes increasingly erratic and eccentric, losing his sanity in this dark new world of fame. Lee Joon gives a stellar performance as a young and passionate but ambitious actor who gradually turns into a maniacal narcissist out of touch with reality - while the audience themselves undergo a similar journey to make sense of whether it is the real story unfolding before them, the unravelling of the lead actor’s distant memories, or if it is all just a film within a film.

As Oh Yeong continues on his self-destructive path and loses grasp of reality, his relationships and sex scenes with female actresses become more dispassionate and abusive. It is only in the final moments of his downfall, as he replays and acts out his memories of a past love from a more innocent time that the extent and price of what has truly been lost is realised, in his maddening pursuit for the limelight.

“Rough Play” is both a parody and tragedy, but what makes this film impressionable long after the lights have come on is the heartfelt depiction of the surreal, fickle nature of the entertainment industry, one whereby life mirrors art and art reflects life.