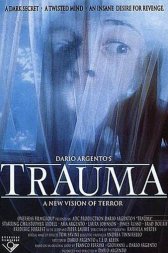 Trauma
Italy, USA, 1993, 106 minutes Horror, Mystery, Giallo, Slasher
If there's one reason you have to catch this, it's that it features one of the greatest weapons in slasher-filmdom - a mechanical noose! Not only is it an ingenious device that allows for some spectacular kills, but it looks realistic and performs well, which is a nice accomplishment considering the lazy fakery you usually get in slasher films. Plenty of great kills, with victims decapitated in pretty gruesome ways that are quite fun and exciting, make this one of Argento's true guilty pleasures. A real switch-off-your-brain fun time. It stands out as being one of his most unique films, probably because he's much more restrained visually and aurally here (no doubt due to the American influence/producers/financing and lack of silly dubbing) but no less audacious in his plotline trickery. A guilty treat.
Like this Review?
Write your own review?
DooVOTE
Not for me
Like this Review?
Write your own review?
COMMENTS 0
Your Comment...