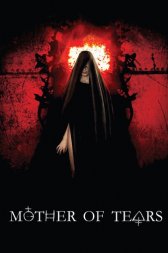 The Mother of Tears
Italy, 2007, 102 minutes Horror
One of the biggest pluses to this one is that there's a large amount of action which moves the whole thing along at a nearly-breathless pace. The chase through the museum, complete with the early sequence where they open it and are attacked by the creatures, is amazing for it's an incredibly suspenseful scene as well as one with a lot of action due to the number of incredibly innovative ways of escaping danger, and it's one of the film's highlights. Other big ones include the attack at her apartment by one of the monkey creatures, the confrontation among the train passengers, another rather suspenseful attack in her apartment by one of the possessed members of the cult and the grand finale, which is perhaps the best scene in the whole film. Otherwise, the story is a real rag-bag of nonsense, but then what did you expect from a recent Argento film? There's a lot to like in this one, and with a few small problems that really aren't that damaging, this one manages to raise itself up quite nicely. Highly recommended for those who enjoy his other works, are interested in such fare or want to finish off the series, while adamant non-Argento fans should heed caution.
Like this Review?
Write your own review?
DooVOTE
Not for me
Like this Review?
Write your own review?
COMMENTS 0
Your Comment...