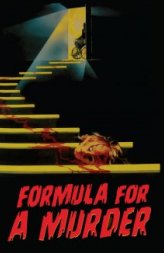 Formula for a Murder
Italy, 1985, 96 minutes, HD Horror, Giallo
Formula for a Murder in one of the latter day giallo flicks made in the 80’s. By this point in time, the more mystery-driven style had made way for films with much simpler plot-lines. This movie is no different from others in this respect – it sets up a mystery narrative, only to dispense with it half-way into the movie and going down a more straight-forward path until it reaches its climax. A wealthy paraplegic woman falls in love with a man who has been hired to train her for an archery/fencing competition. She lost the use of her legs as a child when falling down a flight of stairs when running from a rapist priest. In the present day, she starts being menaced by a mysterious sinister priest.

This one starts very effectively, with a couple of well executed scenes. In the opening segment, a little girl is menaced by the shady priest. The scene is scored with some very creepy music, is shot in a dream-like fashion and also includes details like a creepy child’s doll. It’s a moment that could easily have graced one of the gialli from the golden age of the genre back in the early 70’s. Immediately after this we have a set-piece in a church where a priest is murdered by a black gloved assassin. Up to this point, this has all the hall marks of a classic-style giallo. But, as I said earlier, the mystery is revealed early and the focus is changed but not really to the film’s overall benefit, as I think personally that the mystery factor adds quite a bit to this particular genre. Like many of its peers, though, it does have its fair share of gory murder set-pieces and some are quite striking (if you can forgive such a dreadful pun).

This one was helmed by the middling Italian director Alberto De Martino who made several films of various genres, the best one of which was possibly the pretty good Exorcist (1973) knock-off L'anticristo (1974). It also features the 80's Italian b-movie leading man David Warbeck in the role of the fitness instructor. It additionally is an example of another early 80's Italian trend in horror movies in that it is set in America, not Europe. I guess this was to help pass them off as American products which I imagine helped sell them easier to certain demographics. Although, it’s always a bit of a shame losing the Italian flavour that can be derived from shooting the thing in pastaland. Overall, Formula for a Murder is a decent example of the genre but not much more. It does have some very good moments though, and will certainly offer something to disciples of the genre though.
Like this Review?
Write your own review?
DooVOTE
Not for me
Like this Review?
Write your own review?
COMMENTS 3
Your Comment...
LIKES 1
blacksnakemoan
blacksnakemoan