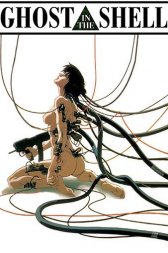 Ghost in the Shell
Japan, 1995, 83 minutes Animation, Science Fiction, Action, Anime
I’m going to be very honest: this is actually a film that I love talking about more than I do watching it. The philosophical aspects of this film actually are fascinating: sci-fi films especially tend to earn extra points for me when they handle postmodernist issues (man vs. technology, man vs. reality, etc), which includes films like Blade Runner and The Matrix (which was heavily inspired by Ghost in the Shell). Ghost in the Shell has a very interesting commentary about the fusion of technology and the mind, but also about the relationship between the mind (the ghost) and the body (its shell). Its messages age well, and are even applicable to the technologies we have now and the internet age of communication. If you have an interest in technology, philosophy of the mind, or psychology, then this film is just for you, and I love discussing it with others.

The problem for me, though, is that the narrative and character aspects do drag the film and make the film less engaging. The storyline with The Puppet Master was established for a while and then resolved too quickly and almost anti-climactically, as if that plotline itself were an afterthought. Most scenes were focused on giving out exposition, Kusanagi tackling her humanity, consciousness, and identity, which is all fine, except it doesn’t feel like the plot is advancing in any way: because the film pauses so much for characters to talk, it makes the film feel slower than it really is, even if their discussions are interesting to listen to. The animation can have some exciting action, gorgeous backgrounds and details which I love, but there are many moments when it just reflects the slow pace of the film, where not much happens on screen.

During a discussion of this film, one my friends admitted that he couldn’t remember much of the film (even though he had just seen it), and I wasn’t surprised: the story can easily fail to engage the audience and make them care about what’s happening. In fact, the film is treated so seriously that I rarely see anyone smile in the film, so it becomes a little harder to relate to the characters. If you want something with a better pacing and a better balance of story and characters with its themes and ideas, I’d recommend the series Ghost in the Shell: Standalone Complex. Still, I will not deny the legacy and artistry of this film. I just personally couldn’t get invested with the characters or narrative as much as I could with the film's messages.
Like this Review?
Write your own review?
DooVOTE
Not for me
Like this Review?
Write your own review?
COMMENTS 0
Your Comment...
LIKES 2
blacksnakemoan
MaeMaeDecena
blacksnakemoan
MaeMaeDecena