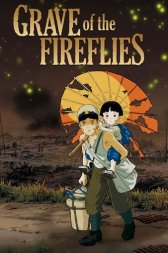 Grave of the Fireflies
Japan, 1988, 89 minutes Animation, Anime, Childrens
A very haunting tale of war and a generation that suffered through it, this is a must-watch for animation fans and film fans alike.

World War II is one of the most difficult topics for Japanese audiences, since the country was left in such a horrible state. As a war film, it stands out because it isn't just about the horrors of war and how Japan struggled to survive, but also because of the two leads: the young Seita and his even younger sister Setsuko. Having young kids for leads is less common in war films, as we focus on them living out these terrible conditions, which allows the youths of the following generation to best relate to that time period. During the 80s, there was a huge problem with Japanese youths, as they had become more rebellious and involved in criminal activities (films like Akira tackle these issues in some way). So it's like this film was specifically made for that generation of youths, so to come to understand the previous generation. Nothing could be clearer than that scene near the end where we see other young people coming back to their homes which were not destroyed by enemy aircrafts, which serves to contrast with Seita and Setsuko. Some youths were luckier than others, unlike Seita and Setsuko. And upon further reflection, the next generation was also luckier.

Seita as a character reflects Japan's pride and attitudes of themselves during that period. The kids had a good reason for leaving their aunt who sees them as scum and just a waste of space and money, but at a time of desperation, when they were nearly out of food, Seita should have swallowed his pride and returned to their aunt to save his sister. He was partly upset when he heard that Japan had lost the war because they had surrendered, which goes against what Japan used to stand for, even if it meant that the war was over. His ghost looks back on his past with regret, and then as he sits in the view of present day Japan, he gives a glance at the audience, specifically the youths, as if he intended to share this story with them.
Like this Review?
Write your own review?
DooVOTE
Not for me
Like this Review?
Write your own review?
COMMENTS 1
Your Comment...
LIKES 2
sharonmae
blacksnakemoan
sharonmae
blacksnakemoan