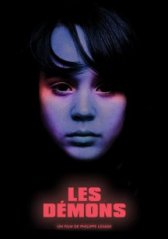 The Demons
Canada, 2015, 118 minutes Drama, LGBT
There is a generous array of cinematic reference points that can be used in any discussion of The Demons, the piercing narrative feature debut from French-Canadian documentarian Philippe Lesage. The patient, steely deliverance of its upsetting subject matter calls to mind Michael Haneke at his most precise. The film’s subtly nightmarish vision of suburban adolescence is reminiscent of the dark anthropology of Gus Van Sant, Larry Clark and Harmony Korine, while the distinctly retro menace of its AIDS-era dreamscape suggests the film shares some DNA with Todd Haynes’ 1995 masterpiece Safe. Its mixing of childhood mythology, sex-inspired panic and real-world danger set to a dread-ridden synth score could even place The Demons as a more left-field, realist alternative to this year’s American horror critical darling, It Follows. But the quietly complex, inventive and purposeful cinematic language of Lesage’s film suggests that his method is already wholly his own, signalling what feels like a brave new voice in North American cinema.

The Demons is one of those films where the narrative progresses on a largely sub-surface level as the troubled young Felix incidentally absorbs the conversations and actions of his elders (from his parents to his teachers to his older brothers’ friends) which then become rearranged by his psyche to emerge later through his own actions. One distressing early scene, for example, sees Felix and his two siblings getting sucked into a parental conflict like casualties in a hurricane – an effect manifested in the intense physicality of the dispute. This moment subsequently finds a call back in an unnerving game of house Felix plays with a soft-target schoolmate.

Sex and sexuality are primary topics here, as Felix overhears rumours and half-truths on STIs, homosexuality and a murderous sex predator at large in the neighbourhood. A feeling of vulnerability to unseen forces arises and bolsters the film’s general malaise, sinister in its lack of specificity. Watching Felix gradually become an increasingly, removed agitated individual, the effect is chilling, horrifying even, but you aren’t always sure exactly why. You just sense a growing indeterminate fear evolving unaddressed in the vacuum that is Felix’s silence and there’s a queasy uncertainty where these bottled up emotions will take him. The other shoe finally drops in the film’s second half when new perspectives come out of the woodwork and this vague dread is replaced by real terror.

It’s a challenging feat handled with bold proficiency. Imbued with rich, colourful textures, the camera is a silent stalker in itself, with Lesage proving to be strikingly attuned to the relative motions between his camera and his subjects. He films a scene of children swimming lengths in a public swimming pool with an entrancing sense of rhythm and gives haunting life to a variety of fairground attractions with an effect that goes beyond the obvious allusions to loss of innocence. While the paradigm-shifting development that kicks off the second half opens the film up to accusations of exploitation, The Demons isn’t a feature that goes for easy button-pushing. This film isn’t just ‘shocking’, it’s profoundly frightening in a way that only a skilled, thoughtful craftsman can succeed in. Finding equal anxiety in the paranoias of the human mind and the threats of our surroundings, this is the coming-of-age film at its most fiercely un-nostalgic and the horror film at its most cunningly abstract.
Like this Review?
Write your own review?
DooVOTE
Not for me
Like this Review?
Write your own review?
COMMENTS 0
Your Comment...
LIKES 1
snakeeyes
snakeeyes