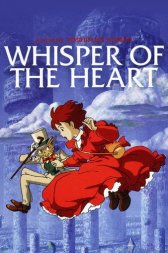 Whisper of the Heart
Japan, 1995, 111 minutes Animation, Family, Anime, Childrens
The director of this film, Yoshifumi Kondo, was a key animator in Studio Ghibli and has worked alongside Hayao Miyazaki (who wrote this film) and Isao Takahata for a long time. He was actually expected to be the successor to the studio, but sadly passed away three years after the film’s release. This film was his first and unfortunately last film. It’s such a shame, because to me this film is worth watching!

This film actually takes the concept of following your dreams, but turns the idea on its head: it's actually more about where a dream begins. When and how does someone discover their passion? How will this little knowledge change your attitude about your own future? It’s a film about growth, but it’s also about how your dreams will affect your future and how following your dreams will guide you in life. You aren’t just thinking about some hobby or talent that you really like; you’re deciding what you want to do for the rest of your life, which is a very deep and personal conflict.

Shizuku discovers her passion in writing, so she devotes herself to writing a novel to the point that her school grades drop. She wants to be like Seiji, who seems to know exactly what he wants at his age and is willing to drop high school for it. To her, completely devoting herself to her ambition would also mean that she’s worthy enough for him. But she has to understand that at this point in life she still needs to discover herself. Even if she wants to become a writer, there's still a lot left for her to learn.

Although the promotional material focused a lot on the fantasy elements, including the poster of the film, that element actually comes from the girl's imagination and is used sparingly in key moments of the story, as she writes and finds inspiration for her novel.

I do recommend this film, though I will say that the English dub suffers from a few problems with the dialogue: sometimes the dialogue deliveries feel awkward, they repeat the word "corny" several times which I personally find odd, and the new lyrics of "Take Me Home, Country Roads" sounds very odd. The Japanese version that Shizuku writes wasn't a direct translation of the original song, but what she wrote for her graduation and it's used to fit into the themes of the film (and it's actually a version of the song which I actually prefer over the original song!), but the English dub translates those lyrics from the Japanese version, and it just feels awkward listening to them. Other than that, the English dub actors are fine, but I prefer the Japanese dub as a whole.
Like this Review?
Write your own review?
DooVOTE
Not for me
Like this Review?
Write your own review?
COMMENTS 0
Your Comment...