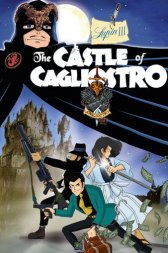 Even if you are not familiar with the original Lupin III anime, it’s probably best not to know much, since Lupin’s character in this film deviates a lot from the original. While some fans consider this one of the best Lupin III films, fans of the original anime will realize that this is not the Lupin they’re familiar with. The original Lupin is much more of a pervert and a jerk, while this version Miyazaki makes him more of a heroic figure more than a guy just in for the money or for selfish reasons, and his playboy side is less noticeable. The character of Fujiko also gets changed drastically, as this is an example of Miyazaki wanting to portray more empowered female characters. Some fans will be upset with these changes, but the characters, whether in or out of character, are still very fun and likeable! And Lupin is still very smart and resourceful. I also liked the original character Clarisse: despite having to be rescued, she wasn’t completely defenseless and I liked her sincerity and her learning to become braver. This is probably Miyazaki’s wanting to tell the story as he wants to tell it, now with more creative control as the director.

The tone and story being told is at least faithful to the original. It’s like an action/crime film with an Indiana Jones tone. While Miyazaki deals with some strong political and economic issues in the story, as well as a theme of history and legacy, this is overall an action/adventure film with an engaging and well-paced story and a good mystery. Even with some serious or dark elements, the film keeps the balance in check with the overall light-hearted and fun tone, which includes great humor, cartoonish slapstick, and fun action scenes. One of the most gripping moments sequences is where Lupin climbs up the castle and walks on the rooftop. With the scale of the castle and the steepness of the rooftops, we're hoping that Lupin keeps his balance and doesn’t fall-off! It also has some calm or tender moments when necessary, and it makes us care about and understand the characters even more.

Although one of the lesser known Miyazaki films, Castle of Cagliostro had brought some influence to other animated films, such as Disney’s The Great Mouse Detective, which paid homage to the clock tower scene from this film. This is definitely a good start to Miyazaki’s film career. One of the best, and most underrated, action/adventure movies I’ve ever seen!
Like this Review?
Write your own review?
DooVOTE
Not for me
Like this Review?
Write your own review?
COMMENTS 0
Your Comment...
LIKES 2
alliebentley
MaeMaeDecena
alliebentley
MaeMaeDecena