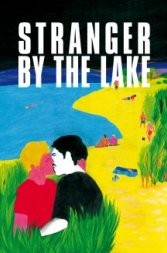 The lake glistens as the shards of sunlight refract off its glassy surface. The cool water is framed by verdant forestland at its flanks; bushes and treetops quiver as the zephyr seduces them with its dizzying dance. This is the setting for Stranger by the Lake that writer and director, Alain Guiraudie, depicts with filmic virtuosity. The tranquillity of the setting betrays the true nature of this film; an eerie psychological thriller replete with explicit homoerotic shenanigans, and murderous intrigue.
Right from the outset, the serenity of this lakeside scene is punctured by men of all ages prowling around in various states of undress, browsing for a suitable partner with whom they can engage in an afternoon of heady flesh grasping under the dappled shades cast by the lakeside foliage. This is a meeting place for predominantly homosexual men and some naturists to sunbathe, swim, and copulate.

We follow the exploits of the boyish protagonist of the piece, Franck, played superbly by Pierre Deladonchamps, who adeptly exudes youthful exuberance and emotional naivety in equal measure, giving credence to the intensely conflicted relationships that develop over the course of the film. Franck befriends a portly recent divorcee, Henri (Patrick d’Assumçao), and falls in love with the strapping but oddly disquieting, Michel (Christophe Paou). The narrative is dark and the relationships complex and it quickly becomes clear that the good-natured lakeside frolics belie sinister activities that trickle poisonously into the azure waters of this mid-simmer idyll.

The film is honest in its portrayal of the sordid homosexual encounters offering a fascinating, and often amusing, insight into the bizarre etiquette the men adhere to prior to the genesis of these wantonly ephemeral carnal skirmishes, facilitated by nothing but leafy groves and sun-kissed towels for comfort. All of the action takes place at the lake and in the surrounding woodland; the simplicity of the setting complements the succinctly delivered, daring, and enthralling plot, which is excellent both in terms of the pace of the narrative, and the intricate web of relationships that develop between the central characters.