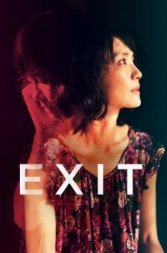 Exit
Taiwan, 2014, 94 minutes Asian, Arthouse
I was lucky to have won a copy of this film on DVD in a recent twitter competition run by Filmdoo (thanks!).

Hsiang’s directorial debut is a true tour de force of cinematography, partly filmed voyeuristically, placing significance on how Ling’s mundane and lonely life can be represented by, for example, the tired wallpaper which needs replacing or the front door lock, which sporadically does not work properly. The premise of the film is simple; Ling (the protagonist of the movie) is diagnosed with early onset menopause and having familial duty to care for her mother-in-law who is in hospital, she meets a male patient, Chang, whom unlocks and evokes desires she has not experienced in many years. Without spoiling this for others, this film demonstrates how East meets West in terms of desires women experience/want even in circumstances when this should not be expressed. A true gem of a film, which I highly recommend.