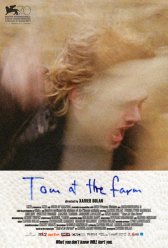 Tom at the Farm
Canada, France, 2013, 105 minutes Drama
Dolan claims that he had never seen a Hitchcock film before making Tom at the farm, a somewhat dubious assertion given the strong resonances of Psycho and North by Northwest that punctuate this psychological thriller. The film is an adaptation of Marc-Bouchard’s play that sees Tom struggle to come to terms with the death of his lover, Guillaume. Amidst a dreary, desaturated landscape, unsettling ties are forged between Tom and Guillaume’s family members, who are all seeking to replace the departed. What most struck me about Tom at the farm was the disturbing relationship between the protagonist and Guillaume’s brother, Francis, which incongruously bears witness to both gentleness and extreme violence. Scenes implicating these two characters are replete with homoerotic tension and harbour a palpable air of Stockholm Syndrome. Dolan makes no apologies for dominating Tom at the farm (directing, starring, editing and writing the feature). In what has to be one of the best Twitter put-downs ever, the filmmaker told ‘The Hollywood Reporter’ that they could “kiss his narcissistic ass.” Well played.
Like this Review?
Write your own review?
DooVOTE
Not for me
Like this Review?
Write your own review?
COMMENTS 0
Your Comment...