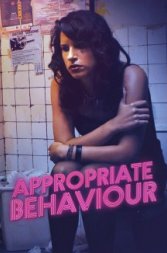 Shirin - a twentysomething living in New York experiences a crisis when she breaks up with the love of her life, Maxine.

Between various unfulfilling sexual encounters and unsuccessful attempts to patch things up with her girlfriend, Shirin feels she is failing to live up to what her traditional Iranian parents and high-flying older brother expect of her. In fact she is still looking for the ‘right time’ to tell them she is bisexual - a source of deep resentment in the openly-gay Maxine and one of the main reasons behind the break up.

Appropriate Behaviour is genuinely very funny, especially in its gentle mocking of Brooklyn’s hipster subculture and in the entertaining repartee between Shirin and best friend, Crystal - who supports her hopeless friend through her tumultuous love life.

The film is also refreshingly honest about sex: one encounter in particular - when Shirin is picked up by a young couple in a bar - feels suitably frank and unvarnished. The husband becomes jealous of the attention Shirin is paying his wife and senses that she’s not as into him.