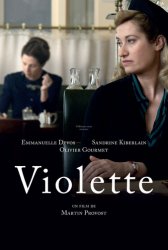 Martin Provost, the director of the 2009 César Awards winning movie “Séraphine”, once again explores the life of a wounded and rejected woman from a working-class family, who finds a late success as an artist. This time, it is the story of the French feminist Violette Leduc, narrated through her relationship with the great Simone De Beauvoir, who helped her become the writer she aspired to be.

The film opens with Violette penning her first and unsuccessful novel “L’Asphyxie” (“In the Prison of her Skin” in English) in 1942, while living with the French homosexual writer Maurice Sachs. Maurice pushes her to write about herself: it ends in 1964 with the triumph of her novel “La Bâtarde” (“The Bastard”). Emmanuelle Devos, with whom the director wrote the part in mind, plays the parts of Violette, and makes a perfect duo with Sandrine Kimberlain as De Beauvoir.

Martin Provost succeed to show the complexity of this woman that was all her life in quest for the love she didn’t receive from her mother, and her emancipation through literature. In fact, the movie itself is a tribute to literature. In six chapters, as if in a novel, the film goes through all the events of the heroine’s life that helped her to become a writer.

Leaving the countryside for Paris, Violette meets the author of “L’Invitée” (“She Came to Stay”) that agrees to read her novel. After that, she starts evolving in the Parisian literate circle of the time – Sartre, Camus, Genet – but she is still not able to live from her art, and earns a living as a black marketer. Violette is deeply in love, obsessed with Simone De Beauvoir, who always keeps distance from her, and suffers from paranoia. But the movie is also a reflection upon the literature itself. It questions the fact that young talented writers are not always the popular ones, and that the mercantile logic often downplays the quality in the publishing world.

A writer himself, Martin Provost achieved an intimate movie with a modest €5m budget, giving a brilliant insight of the writers’ world in the post-war Paris. With the help of the two talented actresses, he succeeds to convey the suffering of Violette Leduc, a woman that, despite her inability to be happy, provided the basis to auto-fiction and to feminist writing in France.