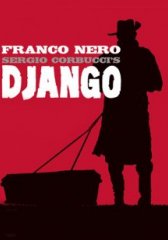 Django
Italy, 1966, 93 minutes, HD Western, Classics, Action
Classic spaghetti western! If you haven't heard of that term yet, Django should be on your schedule. Especially if you have seen the Django Unchained by Quentin Tarantino, I highly recommend the original Italian Django. Not only can you compare the films and the plot, but the change in the industry during time as well.
The film was shot with a very low budget, yet it brings amazingly designed and full of non-stop action. I can guarantee you will want to see it again.
Django - a former Union soldier headed for a small town on the Mexican side. Along the way he finds a woman who is being beaten by a handful of Mexicans. After dispatching them quickly with only six shots, another group of horsemen arrive. These are Americans but wear red scarves or hoods, suggesting an element of the Klan. They suffer a fate similar to the Mexicans.
Django's goal is to avenge his wife who died at the hand of one of the equally evil group of bad guys. Either the Mexican revolutionaries led by Gen. Rodriguez or more likely, the red KKK dudes and their leader Maj. Jackson . Jackson is so evil that he dispatches young Mexicans one at a time to run up a hill, before shooting them with his rifle as target practice. While Django is adept with his handgun, he only has one and it only has six bullets. So to everyone's surprise he invites Jackson to bring his 40 member gang into town for a final shootout. Naturally Django has a surprise waiting.
Mud, Blood and Brilliance!