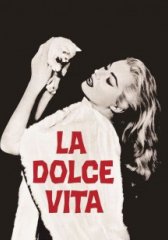 La Dolce Vita
Italy, 1960, 174 minutes, HD Comedy, Drama, Classics, Arthouse
Tender, funny, mischievous and worrying, the notorious La Dolce Vita from esteemed director Federico Fellini broke box office records, won the Palme d’Or at Cannes and invented the word ‘paparazzi’ all while causing more controversy than almost any other film of its time. With a title that translates to ‘The Sweet Life’, Fellini’s arguably best work rubbed government censors and the Vatican the wrong way with its provocative observations of depravity amongst the famous and wealthy (it was banned in Spain right up until Franco’s death in 1975). In the decades since, the film has garnered a legendary reputation among critics as one of greatest, most important pictures to ever come out of Italy – and, yes, it just might be that good. Clocking in at just under three hours, it’s a long sit but it has to be when it’s painting such a complete picture of an entire culture of people. Its scandalous content made it popular in its time and its immaculate technical craft has made it a film school favourite but it’s the film’s empathy and novelistic richness that have truly preserved its greatness.

The film follows the eventful nights and disillusioning mornings after of gossip magazine journalist Marcello Rubini. We see him shadow stories, chase famous women, attend parties and do a whole lot of driving through the streets and outskirts of Rome, while occasionally checking in with his caring, mentally unstable girlfriend. The episodic narrative highlights the disjoint of Marcello’s life, hopping from one social gathering to the next with restless discontent. Each chapter reveals a new layer in a celebrity culture which the film posits has become the new religion, turning even the old religion into a form of show business. In the first half, we see the full extent of celebrity worship, media exploitation and the hysteria such things can provoke but, in the film’s troubling second half, we don’t even see Marcello do his job, only immerse himself in socials of increasing, desperate depravity. It’s a journey into the heart of darkness via dancing girls and expensive drinks.

As the one narrative component linking the film’s events together, Marcello needed to be every bit as fascinating a character as he is. Played by a versatile Marcello Mastroianni, the ostensibly smooth, passive individual is pulled in several different directions by his conflicting, ever-changing desires. He’s numb to the party life, longing for a more loving and intellectually fulfilling existence. But he also seeks fulfilment in the party life, leading to a series of disappointing hook-ups and almost-hook-ups. He looks up to his friend Steiner (Alain Cuny), a family man with security and companionship – never mind that Steiner is having doubts of his own about the path he’s taken. But Marcello also feels seduced by the romance and glamour embodied by the voluptuous but vacuous Hollywood film star, Sylvia (Anita Ekberg). His destructively co-dependent relationship with his girlfriend, Emma (Yvonne Furneaux), is the closest thing to a point of stability in his life.

The sharp details of Fellini’s imagery elevate his subjects to mythic levels. Buildings ravaged by war contrast with celebrity luxury to suggest oblivious insulation but the film’s images of lavish ruins also place its characters as the latest participants in a lineage of hedonism, implying that their ‘sweet life’ will eventually fade into history. This last idea is presented with a hint of melancholy which suggests that Fellini himself wasn’t entirely above it all – an important factor that allows La Dolce Vita to be more than a moralistic putdown. He may have decried the hollowness of his characters’ ways but when you present these lives with such meticulous lushness and energy, you’re essentially admitting that you’ve felt the attraction. Like his worn out lead, Fellini seems uncertain of the best way for his circus of artists, royals and social elites to find contentment so his film in turn never descends into unsparing ridicule. Making fun of celebrity culture these days is like shooting fish in a barrel. By tempering his criticism with open curiosity and compassion, Fellini created a complex classic of substantial power that bears endless revisiting.
Like this Review?
Write your own review?
DooVOTE
Not for me
Like this Review?
Write your own review?
COMMENTS 0
Your Comment...
LIKES 2
MaeMaeDecena
Sasha1988
MaeMaeDecena
Sasha1988