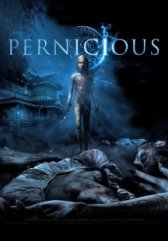 Pernicious
USA, Thailand, 2015, 90 minutes, HD Horror, Asian
Pernicious, the devilish new horror film from James Cullen Bressack, is a picture that looks to have been built from the visuals up, making it first and foremost a rush of the senses. Taking advantage of its vibrant Thai setting (a refreshingly rare environment for American ghost stories), the film has an attractive palette of greens, browns and golds which it uses as the backdrop for some vivid displays of carnage that could even have veteran gorehounds squirming in their seats. But while these are the scenes most likely to dominate conversations on Pernicious, the film is more than just an excruciating spectacle of suffering. Drawing from a broad range of modern horror subgroups, Bressack’s film is a sharp cocktail that will appeal to the tastes of fans from many corners of the genre.

Ciara Hanna, Emily O’Brien and Jackie Moore play Alex, Julia and Rachel respectively, three young American women set to spend their summer teaching English in Thailand. After the three leads establish their cultural ignorance (Julia is pleasantly surprised that they’re staying in a house rather than a hut), they head out one evening to get wasted. The night sees them cross paths with three very suspicious male tourists and they engage in an ill-advised hook-up but the film quickly flips the script on this Hostel-style arrangement. Rest assured, the evening ends with torture – shown at an intensity that not even the film’s bloodstained prologue will prepare you for – but it’s our three protagonists who are the unexpected perpetrators. They wake up the following morning unsure if the gruesomeness they anxiously recall from the night before was a dream or reality. To complicate matters further, a strange golden statue of a child has also inexplicably vanished from their house. As they try to piece together what happened, it gradually dawns on them that a dark, vengeful force has been released into the world.

Pernicious is a film of contrasting elements that come together to form something more cohesive than you could reasonably expect. Its extreme violence is made all the more striking when juxtaposed with the light humour of the film’s quieter moments, while the footage of the film’s central spirit tormenting the living brings to mind both classic J-horror and a variety of American possession films, from Evil Dead to The Conjuring. Its unusual blending of modes provides a unique overall tone. The graphic torture scenes, haunted house creep-outs and amateur sleuthing balance out to create a cruelly comic mystery told with a sadistic half-smile.

Bressack’s agile camera swoops and slinks through the action, overcoming the excessively explanatory, sometimes unnatural dialogue to keep us consistently entertained through pure visual gusto. The film’s abandoned deployment of practical effects betrays a manic, retro-minded love of horror that proves contagious. Pernicious doesn’t deal in raw terror but rampant funhouse mayhem, too amused by its anarchy to take itself all that seriously. Through its likeable leads and contrasting components, the film establishes boundaries and comfort zones that it proceeds to gleefully obliterate across its tight running time. Make no mistake, this can be a staunchly uncomfortable film but that’s not to say it’s above letting you enjoy yourself.
Like this Review?
Write your own review?
Add to List
Not for me
Like this Review?
Write your own review?
COMMENTS 0
Your Comment...
LIKES 1
MaeMaeDecena
MaeMaeDecena