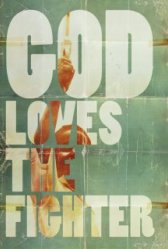 God Loves The Fighter
Trinidad and Tobago, 2014, 104 minutes Crime, Drama
Delivered with fierce political anger and passionate humanism, God Loves the Fighter is a cinematic firebomb flung through the window of a governmental institution. With its hallucinogenic colour filters and instinctual montaging, the hazardous streets of East Port of Spain are presented through the haze of a nightmarish fever dream that keeps its inhabitants trapped in the same destructive cycles. It’s an exhilarating, at times exhausting watch but it has the focus and clarity of a single spoken statement directed straight at the privileged and indifferent.

Amongst the bustle of characters the film observes, the protagonist of God Loves the Fighter is the young Charlie, a man raised under turbulent conditions and with connections to the city’s seedy underbelly. While he wishes to stay on the right path, crime appears to be the only feasible alternative to struggling for a next meal so he takes up a childhood friend’s illicit job offer. Parallel storylines see a boy named Chicken make his first steps into the same life that got his brothers killed and a devoutly religious prostitute named Dinah wrestle with conflicting emotions brought about by her occupation and her principles. The latter of these plotlines eventually overlaps with Charlie’s story, presenting an opportunity for redemption and even escape.

There’s a lot going on in God Loves the Fighter and in a lot of different places with a lot of different people so the voiceover narration of preacher King Curtis is a necessary element to tie the various goings-on together. Written with a terrific turn of phrase and some sharp humour, this device also happens to be one of the film’s most enjoyable aspects in itself, while complementing the dizzy poetry of the film’s visual rhythms. For his debut feature-length, Damian Marcano already appears to harbour a remarkably well-defined cinematic vision. With a style reminiscent of both Harmony Korine’s Spring Breakers and such ‘90s Wong Kar-wai offerings as Happy Together and Fallen Angels, the hyper editing creates a viscerally compelling patchwork of claustrophobic images. While City of God comparisons are certainly warranted, Marcano’s bold sensibilities bring the drama into more abstract, disorienting territory. This is a shattered mirror of a film, reflecting society in jagged fragments.

This fractured design is likely to test the patience of viewers hoping for a more story-driven experience but, as with many a successful work of art, you might need to take a few steps back to see how well it all fits together as a whole. It may only be in the film’s bittersweet concluding minutes that it becomes especially apparent that, despite its seemingly messy form, this is a film built to exceed the sum of its parts. Every struggle and setback is given added resonance when put into the context of the wider patterns the film tragically demonstrates and every victory feels more precious when compared with the confusion that the characters can briefly rise above.

While there are several menacing figures in God Loves the Fighter, there are no outright villains because every selfish action seems like a logical response to the chaotic setting, neglectful authorities and desperate circumstances. When you’re living in a quagmire of greed and exploitation, any act of humanity seems downright counterintuitive and the fight for your own sense of morality is an uphill battle. By immersing us in this deprived, treacherous community, Damian Marcano gives us a nerve-rackingly vivid sense of how strained conditions can cause the worst of our primal instincts to dominate our actions.
Like this Review?
Write your own review?
Add to List
Not for me
Like this Review?
Write your own review?
COMMENTS 0
Your Comment...
LIKES 2
MaeMaeDecena
snakeeyes
MaeMaeDecena
snakeeyes