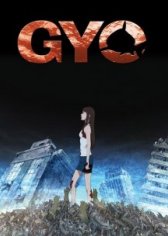 Gyo: Tokyo Fish Attack
Japan, 2012, 70 minutes, SD Animation, Horror, Asian, Anime
Pushing the limits of B-movie absurdity to new extremes, Junji Ito’s manga is brought to life in this anime/horror thrill-ride. A devastating “death stench” has swept Japan creating deadly mutant fish in its wake. On a quest to rescue her boyfriend, Koari finds herself trapped amidst the carnage, battling four legged killer sharks, machine driven squids and other mechanical terrors. Beautiful animation and skilful voice acting captures Ito’s vision of a country brought to its knees and Gyo’s central mystery maintains enough intrigue that even if you aren’t charmed by the animation there’s enough to keep it interesting. Suitably bizarre and very messed up, but at times pushing it a little too far.
Like this Review?
Write your own review?
DooVOTE
Not for me
Like this Review?
Write your own review?
COMMENTS 0
Your Comment...
LIKES 1
MaeMaeDecena
MaeMaeDecena