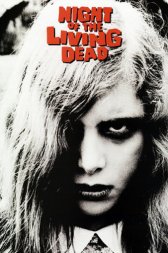 Night of the Living Dead
USA, 1968, 96 minutes, HD Horror, Classics, US Indie
“They’re coming to get you Barbra”. What would the world be today without Night of the Living Dead? For writing the zombie rulebook alone it has cemented its place in cinema history. Since Night, zombie films have been made in their droves, and certainly have have been scarier films, funnier ones, gorier ones and more politically minded ones, but none are as foreboding and well-rounded as Romero’s original. The plot is a simple one, but the blueprint from which all future zombie flicks would be based. A disparate group of strangers hold up in a farmhouse to attempt to survive the forthcoming apocalypse when the dead come back to life with a taste for human flesh. But to only recognise it for ushering in the zombie phenomenon is to do Romero a grave disservice, as, despite some slow pacing and third-rate performances, it remains a harrowing, piece of horror, a triumph of indie filmmaking and an important social commentary that’s lost none of its bite 50 years later.
Like this Review?
Write your own review?
Add to List
Not for me
Like this Review?
Write your own review?
COMMENTS 0
Your Comment...