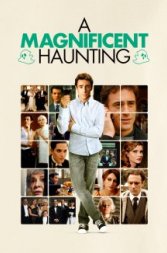 Magnificent Haunting
Italy, 2012, 101 minutes, SD Comedy, Supernatural
Elio Germano plays the role of Pietro, a young actor who has decided to pursue his dream of becoming and actor and decides to move to Rome. Pietro will soon discover that there are some ghostly presences living at his place, but rather than leaving the house, he is determined to share his place and make a harmonious home.The movie recreates two different environments: Pietro’s world which is funny, luminous and optimistic (at least most of the times), and the one of his flatmates’ who are trapped in a reality in which they do not belong and believe that they are living in 1920’s. While watching the film, I lacked some more information about the characters. I would have liked to see more details about their personalities and their relationships with people, how they are and why they do things. By the end of the movie Pietro is still as unknown as he was at the beginning. As in Mine Vaganti (Loose Cannons) the soundtrack is very good, it is appropriate for the different moments and helps in conveying the different moods in the story. The film is funny but there are really dull moments as well. Magnificent Haunting is an entertaining movie to watch if you want something new and different from what you watch everyday.
Like this Review?
Write your own review?
DooVOTE
Not for me
Like this Review?
Write your own review?
COMMENTS 0
Your Comment...