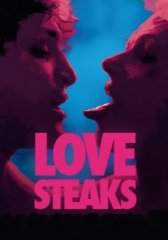 Love Steaks
Germany, 2013, 89 minutes, SD Romance, Arthouse
Clemens (Franz Rogowski) is the new trainee at a luxury wellness center. Earnest, shy and introverted, he is more interested in practicing the removal of bad energies than chasing after girls (think more Joaquin Phoenix and less Ryan Gosling). He encounters Lara (Lana Cooper), a chef who works downstairs who acts as his assertive, boisterous opposite. This is not the story of a breathless love at first sight or any dramatic standing in the rain professions of love but instead more of a clumsy, awkward, graceless falling over sort of romance.

Clemens’s mysterious nature strikes him out as a target of both insult and intrigue. Lara’s all-male, all-vulgar colleagues are quick to insult the “new weirdo” downstairs who they consider to have the emasculating task of helping “older women and men”. His consistent lack of ‘manliness’ becomes a point of obsession for the others and serves to both confuse and intrigue. Even Lara is stumped; “did you play with dolls? You look as if you might”, “did you get beaten? Thick glasses? A limp? In care?” She desperately searches for some sort of defect that will finally explain his peculiar (read: traditionally feminine) nature.

Clemens immediately stands in opposition to the majority of other male leads in romance centered films where the man acts as the confident, active, girl-crazy chaser and my god is it refreshing. Lara instead embodies these traditionally masculine qualities: a competitive, prank-loving, control freak chef who loves a good drink or five. It is this reversal of traits that confront the viewers assumptions of male and female protagonists and love interests that our culture so often tells us are gendered, e.g. sexual assertion and control are to be taught to men whereas vulnerability and passivity should be taught to women. A key scene involving an overly touchy client and a lot of massage oil demonstrates this perfectly. A female client who makes sexual advances towards our male masseur protagonist would usually be written in in Hollywood as Ashton Kutcher’s lucky day, Clemens on the other hand is left uncomfortable and repeatedly denies her advances eventually stopping the session. Clemens’s denial of a woman trying to touch his jewels while getting a massage would usually be fertile grounds for bashing on the grounds of being unmanly or probably gay (something Lara subsequently questions), such is the sexual stubbornness and narrow sexual perceptions of men in rom-coms.

Make no mistake though it’s far from all serious, Clemens’s gawky nature allows for plenty of smiles and laughs. Highlights include when Lara repeatedly demands that he massage and then slap her arse, things become 50 shades of awkward very quickly. Another favourite moment has Clemens performing a cleansing ritual on Lara solely with the use of straw and ancient chants.

Franz Rogowski and Lana Cooper bounce wonderfully off each other and manage to stir up some authentic chemistry while director Jakob Lass keeps things warmly personal, low-key and seemingly improvised. Though technically a rom-com, Love Steaks with its idiosyncratic characters and mumblecore-like production is more likely to appeal to fans of Harold and Maude or Eternal Sunshine of the Spotless Mind than The Notebook. If you like your romances naturalistic, intimate and a bit strange then Love Steaks is definitely one to check out.
Like this Review?
Write your own review?
Add to List
Not for me
Like this Review?
Write your own review?
COMMENTS 0
Your Comment...
LIKES 1
MaeMaeDecena
MaeMaeDecena