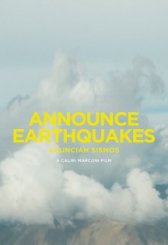 Announce Earthquakes
Argentina, 2014, 70 minutes Drama
As debut features go, never before has a film posed so many questions yet offered so little answers. However, this is not a criticism of Announce Earthquakes, but instead a testament to a film that adheres to the true subjective nature of cinema. The directorial duo of Rocio Caliri and Melina Marcow base their first film together on a true story, detailing the lengths taken by a school in Northern Argentina to deal with a spate of recent suicides, and, the effects such loss has on remaining family members. As we follow the films main protagonist, Mariano, and his attempts at overcoming the recent suicide of his sister, we are drawn into a realm where the very essence of loss itself is stigmatised.

For instance, the school decide to establish an orchestra, where those children affected by loss are encouraged to overcome their plights through music. Under the tutelage of the honest, yet certainly aggrieved Juan, Mariano and his classmates become outcasts, not once featuring alongside other pupils at the school, as it is their loss that has ostracised them. Further evidence of loss treated as a stigma is embodied in the character of Mariano. After suffering the loss of his sister, he begins to drink and entertain weaponry. The suicides have ruptured the innocence of adolescence. It is almost as if those who have been left behind are the ones who truly suffer.

Technically, Announce Earthquakes leaves much for the viewer to consider, as non-linear editing and a vast array of differing stylistic choices almost unsettles the narrative. Caliri and Marcow, switch between an almost documentary fly on the wall approach to fixed wide angles, whilst what appear to be fantasy sequences also briefly interject, depriving Earthquakes of any true continuity in style. Interestingly however, such contradictory uses of certain camera techniques helps elaborate upon the themes apparent within the film. For example, such fractured editing almost serves as the visual representation for the fragility of Mariano and his friend’s mind-sets, after suffering such loss, whilst the use of wide angles renders those within shot somewhat isolated. Therefore, the editing serves as the on screen embodiment of the films themes, confusion, fragility and loss.

By no means is Announce Earthquakes a cinematic masterpiece, yet in my personal opinion, I don’t believe either director felt creating a masterpiece was the objective. Having established their own production company, Hulot Cine, Earthquakes appears to be an experimental testing of the waters so to speak. Observing the way in which both Caliri and Marcow navigate the issues raised by this story, and their experimental disavowal for true cinematic form, only serves to strengthen intrigue for any future projects they may collaborate on together. Announce Earthquakes will certainly appeal to those with a love for independent world cinema with an experimental edge. Followers of films by director Yorgos Lanthimos would be advised to give this a watch, as its plot seemingly mirrors that of his 2011 drama Alps. Admittedly, not all will enjoy this film, but its ability to provoke thought and challenge the viewer should be celebrated.
Like this Review?
Write your own review?
DooVOTE
Not for me
Like this Review?
Write your own review?
COMMENTS 0
Your Comment...