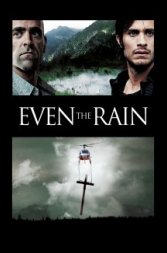 Even The Rain
Mexico, Bolivia, Spain, 2010, 104 minutes, SD Drama, History, Arthouse
Upon first viewing, I must admit that the very premise behind Icíar Bollaín’s Even The Rain had left me somewhat sceptical. With its marrying of different forms, I originally felt the meta-cinematic portrayal of a period in the history of Christopher Columbus, in tandem with a poignant period of Bolivian history would simply be too much for one film. How wrong I was. Such is the films expertise in its measured handling of the films many facets; I was left cursing myself at having committed the ultimate faux pas- I had judged the proverbial books cover. Therefore allow me to atone for my initial judgement by divulging what it is that makes Even The Rain such a sophisticated piece of cinema.

Before doing so however, one must provide a little context to this film. As Costa (Luis Tosar) and Sebastian (Gael Garcia Bernal) arrive in Bolivia to begin shooting their film, they do so at a time when civil unrest is building due to the impending privatization of the Cochabamba water supply by American and British businesses. This, a real event that took place during the Millennium in Bolivia, is thus portrayed at the same time as the film crews attempts to complete their film, giving us the meta-cinematic (film-within-a-film in this case) theme that runs throughout this film. With tensions between the local authorities and the residents of Cochabamba growing increasingly more severe by the day, Even The rain combines a multi layered narrative, subtle character development and historical accuracy to great effect.

Perhaps what is most interesting about this film is how its three-tiered narrative seems to share one common theme, colonization. First, there is the colonization of the Quechan people by Christopher Columbus and his search for gold being depicted in the film. Second, there is the narrative concerning the actual filming of the film, and the crew’s relationship with the locals. Thirdly, there is the narrative of Daniel (Juan Carlos Aduviri) and he and his daughters roles within the film amidst his desire to protest against the privatization companies. Just as Christopher Columbus enslaved the Quechan people, the film crew seemingly ‘enslave’ the locals with their cheap labour rates. All the while, the very water supply so invaluable to these people itself becomes enslaved, under ownership from private companies. Paul Laverty’s script thus renders the period of history depicted in Even The Rain (Columubus’ first voyage into the New World) as an allegory of the continuing enslavement or colonization that is still rife today, albeit through different methods. By implementing this ideology within all of the films subplots, the narrative complexity becomes tightly bound together, avoiding any fissures that may disrupt the understanding of the on screen action.

This narrative structure is then further strengthened by the wealth of incredibly strong performances on offer within this film. As the situation worsens within the city of Cochabamba and the films conclusion comes under greater threat, the on screen desperation of the films main characters becomes ever so palpable. Costa, played by the brilliant Luis Tosar begins the film as an individual whom has very little care for the locals and their plight, yet come the end he has shredded his propensity for looking upon the locals as lesser people. Costa, like many other characters in Even The Rain undergoes a transformative journey. The same could be said for the characters of Sebastian and Daniel too. Each character reacts to the situation at hand in a different way, and in doing so the viewer ultimately learns of each characters true nature come the end of the film. Sebastian is shown to be a somewhat spoilt and desperate individual whilst Costa’ s original arrogance and distasteful persona give way to what is essentially a compassionate individual.

Even The Rain also owes a great deal of its splendour to the very Andean setting in which the film is located. There is an abundance of lush greens and mountains steeped in mist, giving Even The Rain some breathtaking moments of cinematography. If one were to compare Even The Rain to any other film, then one would have to usher forth two of Werner Herzog’s greatest cinematic achievements. Both Aguirre! Wrath of God and Fitzcarraldo make fantastic use of the deep sprawling amazon jungle in much the same way as Even The Rain does of the Andean Mountains.

Ultimately, there are very little negatives that can be drawn from Even the Rain. Paul Laverty’s script and the actors on screen execution of his work is exemplary. Furthermore, the message contained within the film is never muddied, instead it remains with you long after the film has finished. Sympathy is evoked for those who suffered during the real events whilst at the same time, the very median this films depicts (film itself) also comes under scrutiny. After ones initial trepidation, such is the faultless ambition of this film that I can only give it the highest of recommendations.
Like this Review?
Write your own review?
DooVOTE
Not for me
Like this Review?
Write your own review?
COMMENTS 0
Your Comment...
LIKES 1
MaeMaeDecena
MaeMaeDecena