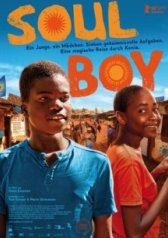 Soul Boy
Kenya, 2010, 61 minutes, SD Drama, African, Arthouse
As the continent of Africa is home to the world’s second largest population and itself inhabits over 20% of the land’s earth surface, it would be fair to say that its cinematic output over the decades has paled in comparison to its size. Admittedly, some of Africa’s superpowers have strived to buck such a trend, most notably in Nigeria and South Africa, with the continuing proliferation of the Nollywood film industry and box office successes such as Niel Blomkmp’s District 9, highlighting how said continent does in fact have a lot to offer the realm of cinema. And let’s not forget recent Cannes Official Selection premieres such as Timbuktu (Mauritania) and Grisgris (Chad). As FilmDoo strives to continue its quest in discovering and detailing the world’s independent and international films, we visit Kenyan capital Nairobi’s largest slum, Kibera, in order to review Hawwa Essuman’s Soul Boy.

Despite Essuman’s film clocking in at a relatively short fifty-eight minutes, there is much to be said about Soul Boy. After we initially see the film’s main protagonist, Abila, lying on a set of train tracks in the film’s opening scene, we are then treated to an ellipsis in time, in which Abila is then seen awaking at home to find his father claiming to have had his soul stolen and unable to open their shop to waiting customers. Struggling to keep his business out of the hands of the local authorities, Abila must for the sake of his ailing father navigate the daily rigours of life in the slum and ultimately find a solution. Aided by the strong willed Shiku, Abila discovers that by helping others, he can in turn help improve his own situation; a beautiful sentiment that runs through the very heart of this film.

Co-produced by renowned German director Tim Tykwer, it is no surprise that after the film’s initial flash forward, we are instantly brought back to the present and thrust into the films central plot, in the same chaotic fashion as Tykwer’s Run Lola Run. Yet here is where the similarities end, as despite the film’s somewhat meagre running time, never does the development of the plot feel rushed. Instead, the depiction of Abila’s ensuing tribulations are handled economically, yet it is the series of moral tasks Abila is set by the witch doctor he visits that give the film its underlying discourse. First and foremost, Frank Griebe’s continuously featured messages of hope in his cinematography, whether it be the close up of a sticker saying “Say no to violence” or the wide angle shot of the main street in Kibera with the slogan “Keep peace alive”. Furthermore, Billy Kahora’s script also raises questions regarding materialism, consumerism and gender equality in African society. For instance, through the character of Shiku, Soul Boy questions the male dominated nature of African families as she admirably fights verbal battles with Abila’s male friends. The theme of materialism is then dealt with as Abila helps hide a thief who is facing certain death just for stealing a mobile phone. Should, in one of East Africa’s largest slums, such acts be met with violence [?]. Don’t such barbaric acts hinder society’s progression [?], almost certainly so. Yet despite such critiques, through Abila’s selfless acts and Shiku’s fiery persona, Soul Boy maintains a great sense of optimism.

The continent’s traditions and landscapes make for entirely captivating viewing. Whilst the impoverished slum highlights the daily plight the residents of Kibera must suffer, through the camera’s gaze, the winding myriad of man-made paths allow the cinematography to thrive. There is also a strong theme of mysticism usually found within films hailing from Africa, allowing the realism afforded to such films to be shattered. With a non-professional cast and the use of locations such as Kibera, Soul Boy shares some of the same realist tendencies as the Neo-realist films of sixties Italy, yet amidst themes of mysticism and witch craft, this realism is punctured, giving Soul Boy a tangible edge to its phantasmal elements.

It would be discerning if in discussion of Soul Boy one were to neglect to detail the rather peculiar fashion in which this film was forged. As the German based alternative production company One Fine Day Films and Kenyan production company Ginger Ink began collaborative efforts, the outcome was a film workshop in Nairobi. Armed with a small professional film crew, budding filmmakers in Nairobi were able to learn from those with professional knowledge as well as professional equipment. Taking a small budget and these aspiring filmmakers, not only was Soul Boy born, but those involved had been left with a lifetime’s worth of knowledge that we can only hope will lead to more films of the same quality.
Like this Review?
Write your own review?
Add to List
Not for me
Like this Review?
Write your own review?
COMMENTS 0
Your Comment...
LIKES 1
MaeMaeDecena
MaeMaeDecena