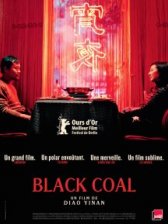 Black Coal, Thin Ice
China, Hong Kong, 2014, 106 minutes Drama, Crime, Mystery, Thriller, Arthouse, Noir
Liao Fan and Guey Lun-mei give fantastic performances that not only adhere to their noir archetypes perfectly, but they also warp them in a entertaining fashion (Liao Fan's character can be hilariously incompetent). The cinematography is astounding (everything from seedy bars, snowy valleys, police stations, barbershops, laundromats etc. look fantastic). Diao's surreal direction sometimes works spectacularly well (there's an arrest sequence in a barbershop that combines suspense, brutal violence and physical comedy really well) (Ice plays an integral part to the plot as well as adds much-needed humour to the downbeat story). The finale is incredibly satisfying. All film noir tropes are replicated faithfully, yet they are also tweaked (even the story is pure noir). The film demands audience participation, which can throw some off. The film is too arthouse for mainstream viewers (the surreal style can be quite confounding). Tone shifts can be quite jarring. SCORE: 8.5/10 (Indescribable and outworldly in the best way possible. It's fantastic to see film noir beautifully realized.)
Like this Review?
Write your own review?
DooVOTE
Not for me
Like this Review?
Write your own review?
COMMENTS 0
Your Comment...
LIKES 1
MaeMaeDecena
MaeMaeDecena