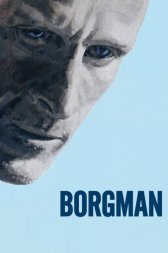 Borgman
Netherlands, Belgium, Denmark, 2013, 113 minutes Thriller, Drama
Borgman is an ovni coming to us from the Netherlands. The opening scene sets up an disturbing ambiance that maintained my curiosity throughout the whole film: a manhunt takes place in the wood where three armed men (among them a priest) run after homeless people who were hidden underground. One of those homeless people is Camiel Borgman (played by Jan Bijvoet). But who is he really? A dream? An evil guy? The allegory of our fears? We keep asking ourselves these questions without having any answers at the end. If this last point gives a frustrating feeling when the ending credits roll, I cannot deny Borgman is an original and special film written and directed by the talented Alex Van Warmerdam. The touch of black comedy brought by the script and the brilliant performance by the cast lightens up a rather dark and unsettling atmosphere. I think Borgman is definitely worth a watch for its originality and a representation of the recent Dutch film scene.
Like this Review?
Write your own review?
DooVOTE
Not for me
Like this Review?
Write your own review?
COMMENTS 0
Your Comment...