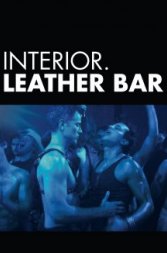 Interior. Leather Bar.
USA, 2013, 60 minutes, SD LGBT, US Indie
There are three certainties in life: death, taxes, and if a camera is rolling long enough, James Franco will appear in front of it. Like an urban legend, or a persistent skin condition, James Franco seems to be all over the place these days, and despite how much I really would like to despise him, I just can’t. I was hoping Interior. Leather Bar. would finally provide me with a reason to hate his handsome face; unfortunately it just made things worse.

Interior. Leather Bar. is James Franco and Travis Mathews behind the scenes documentary of Mathews and Franco’s reimagining of the lost 40 minutes of the 1980’s Detective Thriller Cruising, staring Al Pacino, cut to avoid an X rating as it took place in a gay S&M bar. The production is cast and filming begins, we are confronted with Val Lauren, the mildly homophobic actor who reluctantly takes on Pacino’s role. As the production comes together there are heated discussions between Mathews, Franco and Lauren as we are introduced to the conflicting motivations that actors face, and the ramifications of creative choices. Eventually the nature of freedom, sexuality, queer culture and identity are all explored in these candid exchanges.

James Franco seems to have a real understanding of some of the biggest political issues facing queer culture, on top of being talented and ridiculously good-looking and charming, the fucker. Mathews and Franco consider the implications, not of tolerance, but assimilation and erasure of Queerness and counter culture. This documentary will stimulate a lot of discussion, and bring to light the contemporary debates in queer culture and attitudes towards queer people that you may not have considered. There is a particularly powerful scene where the three consider censorship and how it relates to sex over violence. Interior. Leather Bar. is explicit in the best sense of the word, but it encourages you to consider how much ‘explicit’ material you are exposed to on a daily basis. The dialogs that take place in this film will get you thinking, not just about issues facing the LGBTIQ community, but of media, how sex and violence are portrayed, and it will stick with you for some time. 4.5 out of 5.