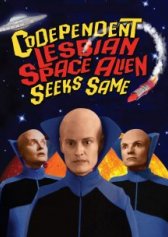 Codependent Lesbian Space Alien Seeks Same
USA, 2012, 76 minutes, SD Comedy, Science Fiction, Romance, LGBT
Codependent Lesbian Space Alien Seeks Same is one of the funniest films I have seen for a long time, I guess you could call it a Gay Rom-Com from beyond the Moon, but better than that. A Parody of B-grade fifties Sci-Fi Horrors, enter three unlikely outcasts from the distant planet Zotts: Barr (Cynthia Kaplan), Zylar (Jackie Monahan) and Zoinx (Susan Ziegler). Exiled to earth for the crime of feeling too deeply on Zotts, where high emotions are burning holes through the Ozone layer; if they wish to return to Zotts they must have their hearts broken. We are introduced to Jane (Lisa Hass), a shy stationary store clerk who has all but given up on finding a compatible partner in a cold, indifferent Manhattan. Can Jane find a love that’s ‘out of this world’ before two hapless government agents thwart their affections?

Codependent Lesbian Space Alien Seeks Same has enough campy cheese to be enduring, but it doesn’t over do it, just enough to pay proper homage to films like Plan 9 From Out Of Space. A lot of humour is generated from the Aliens from Zotts and their attempt to assimilate in to Earth culture, kind of like Third Rock From The Sun, but more absurd. The dialogue is very witty, and each character will likely make you gasp for air laughing at least once, but I can’t even think about Zylar (Jackie Monahan) without smiling. The visual effects are particularly funny; they nail that certain 1950’s aesthetic perfectly, and the techno-score is a perfect comic fit. If you enjoyed parodies like The Lost Skeleton Of Cadavra, or fish out of water comedies like Third Rock From The Sun, or if you just want a good laugh this is the film for you – 4 out a possible 5 cheese cakes.