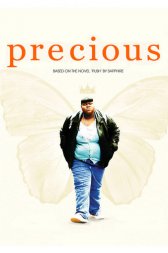 Precious
USA, 2009, 110 minutes Drama, US Indie
This is an adaptation of author Sapphire's best-selling novel about an overweight, illiterate African-American teen from Harlem who discovers an alternate path in life after she begins attending a new school. Clareece "Precious" Jones is only a teenager, yet she's about to give birth to her second child. Unable to read or write, Clareece shows little prospect for the future until discovering that she has been accepted into an alternative school. There, with a little help from a sympathetic teacher and a kindly nurse, the young girl receives something that most teens never get, a chance to start over again. First-time actress Gabourey Sidibe gives a powerful, emotive performance. Equally good is talented actresses Mo'Nique, who is terrifying as Precious' mother, and Patton as the compassionate teacher. Lenny Kravitz and Mariah Carey also have minor roles. The pacing seems to slow down unnecessarily towards the end and Precious' educational progression seems a bit confused and not completely fleshed out, but this is minor stuff. This is a very inspired work of art by someone with a fresh vision.
Like this Review?
Write your own review?
DooVOTE
Not for me
Like this Review?
Write your own review?
COMMENTS 0
Your Comment...