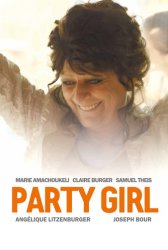 Party Girl
USA, 2014, 95 minutes Arthouse
At the 2014 Cannes Film Festival, "Party Girl" appeared as an ovni in today's French cinema scene. This is a debut feature where all actors involved are non-professionals. The setting is the damaged region of Lorraine (north-east of France), at the French-German border, where the population is unselfconsciously bilingual. Angélique, who is the very own mother of one of the young directors, lightens up the screen by her presence. Through her, the film raises the topics of aging and love - or lack of. When a regular customer proposed to her, Angélique agrees, mostly to feel loved and desired. The night life ambiance is contrasted in the film by the day time encounters with her children and grand-children. Angelique might not have been the perfect example as a mother, but her children still worries about her. Party Girl keeps surprising the audience by never goes where expected. It doesn't fall into a simple social film, it's not just a fiction nor a documentary.The film may lack of substance in the way that it never explores deeper, for instance the story of the husband.The film remains one of the most beautiful portraits of a woman in cinema for the last decades.
Like this Review?
Write your own review?
DooVOTE
Not for me
Like this Review?
Write your own review?
COMMENTS 0
Your Comment...