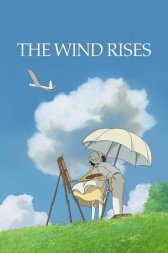 The Wind Rises
Japan, 2013, 126 minutes Animation, Drama, History, Anime, Childrens
What I love about Miyazaki's style of storytelling is that he uses fantasy and fairy tale elements to tell very grounded and human issues. The Wind Rises is much more based on reality compared to his other films, but the dream-like elements are still there: we’re offered an insight to what our main character sees or thinks when he’s working on a plane, sometimes as if he were looking inside the structure of a plane. Other times he imagines or dreams about Italian plane designer Caproni as if they were close friends. The dream-like moments are used at the right times, with planes sometimes being represented as light and graceful, but also big and fierce when the issue of war is brought up.

In Japan there was a bit controversy on the film focusing on a war-plane designer, as they made it seem like Miyazaki was in favor of war, which couldn't be further from the truth. I understand how the wars are a sensitive issue in Japan even to this day, but Miyazaki never glorifies or condones war in any of his films, and here is no exception. Generally he's very bitter towards war. But strangely enough, he always finds a way to look at the issue through a different light. This is a film which deals with the complexity of human creation and progress. In here, Miyazaki completely understands that, while these planes were used for war, Jiro just wanted to do something he loved, and wanted to create something he saw as beautiful. At times he describes himself more as an artist than an engineer. And even if he's upset that his creations are used for war, the main reason he designs these planes is because this is the only way he can live his passion now, and this might be the only chance he will ever get. This, along with other Miyazaki films, deals with themes of creation and destruction, and the possibilities of human progress, both for the better and for the worst: the issue ends up becoming MUCH more complicated than we wish it were. Just like his other films, this story is extremely multi-layered, and the way the story is told is extremely poetic, with great imagery and animation.

Having a very optimistic main character and other memorable characters (and great performances by the actors voicing the English dub), there are a lot of funny and light-hearted moments too, as to balance out with the seriousness and ugly side of war. Even with war, death, and poverty, these are people constantly needing to remind themselves of a more beautiful side of life. This story is all based on this one big irony: how Jiro creates planes out of beauty, and yet they’re tools of destruction. How some things are meant for good, and yet they end up making things worse. How something beautiful can lead to something ugly.

This is perhaps Miyazaki's most personal film to date, and if this really will be his last feature film as he announces his retirement, at least he ends on a very high note.