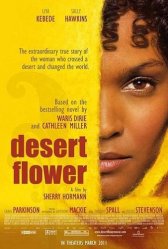 Desert Flower
Austria, Germany, UK, 2009, 120 minutes Drama
Desert Flower" tells an extraordinary story.  The film is based on the life of Waris Dirie, an international supermodel who began life as a member of a nomadic tribe in Somalia. As a child, she was circumcised, as is the custom in many African countries."Desert Flower" tells a rags-to-riches story, but it plays like two stories in conflict. Everything involving Waris in Africa or in London before her success feels true and heartfelt. DOO be aware of violent child-rape / abusive scenes that would make you rather apprehensive.  But DOO watch Desert Flower,  the the underlining romantic sub-plot carries an uplifting-air to the heavier Gender-Bender themes in the Film.
Like this Review?
Write your own review?
DooVOTE
Not for me
Like this Review?
Write your own review?
COMMENTS 0
Your Comment...