Image from: Beneath the Rooftops of Paris (2007) 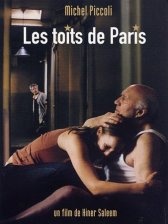 Beneath the Rooftops of Paris
France, 2007, 98 minutes Drama
There is a melancholic and lonesome vibe that  viewers can feel upon watching this film.  It follows the regular routine of Marcel who lives in a dingy and old flat on the top floors of an old building.  During the first few scenes  he is with a friend and roommate named Amar, but the latter eventually leaves for another country. This makes Marcel lonelier by the minute.  He has a good friend, a waitress and later on a young lady named Julie who's from the same building, who later lost a lover to a possible suicide or drug overdose. Scenes tend to be languid and prolonged, with the absence of dialogues at some point but always it's the acting portrayal of Michel Piccoli as Marcel that shines through.  Most scenes taken inside the cramped flat is so dark and sometimes one can't even barely the characters in the dark and this may symbolically allude to the dark days of old age,  where there seems to be little or no hope and old people are somehow trapped in solitary darkness.  Feeling the sadness of Marcel is such a heartbreaking one,  and one can wonder why is it that even though he has a son it seems they are so detached from each other. Truly heart-wrenching to watch,  check out the glowing acting performance of Piccoli who won a Best Actor Award from Cannes for his performance in the movie "A Leap in the Dark".
Like this Review?
Write your own review?
DooVOTE
Not for me
Like this Review?
Write your own review?
COMMENTS 0
Your Comment...