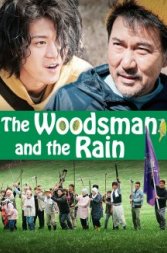 The Woodsman and the Rain
Japan, 2011, 129 minutes, SD Comedy, Asian
Comedic, heartwarming and visually a delight! This film by Shuichi Okita boasts of  hilarious scenes,  a great screenplay and admirable characters. At its core is a story meant to bring two opposite poles together, the old as compared to the new generation and family roles that are somehow trampled upon  due to  egoistic tendencies. Yakusho as Katsu, the woodsman/ lumberjack has a very imposing presence, he's a delight to watch and a very natural actor. There's a spark that got ignited when he first acted as production assistant then extra for a zombie film, which has a very space-out looking young director,  played by Shun Oguri.  While Katsu has a decaying relationship with his true son,  the young director became somehow like a surrogate son for him. Fumiyo Moriya, who wrote the story along with Okita, was the writer of the pinku film "Underwater Love" which led me to realize that indeed, the sense of humor in this movie and of Woodsman and the Rain was identical and was too close for comfort.  Engrossing to watch, this movie won the Special Jury Prize from the Tokyo International Film Festival.  A must-see!
Like this Review?
Write your own review?
DooVOTE
Not for me
Like this Review?
Write your own review?
COMMENTS 0
Your Comment...