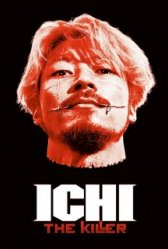 Ichi the Killer
Japan, 2001, 129 minutes, SD Action, Crime, Horror, Asian
I instantly noticed the impressive soundtrack even at the opening part still of this film.  But more so, it was the surreal, disturbing yet stunning cinematography that will blow you away.  The methods and techniques used by director Takashi are simply unique but essential in bringing out emphasis to a certain scene. Just one of the memorable scenes for me would be that highly intense and bloody scene where Ichi kills gang members,  and while blood is splattered on the walls, along with it are the scraped up faces of the men, like a mask or something, sliding down the wall, bathed with blood. In the countless films I've seen it was only in this movie that I've seen such a technique,  dark and so out of this world.  Yet aside from all the killings and blood  I didn't expect that there's also a hint of comedy in this movie as well. You have to watch this film with unblinking eyes to spot those comedic streaks!  Intense, very,very bloody,  disturbing but an amazing work of art by director Takashi.
Like this Review?
Write your own review?
DooVOTE
Not for me
Like this Review?
Write your own review?
COMMENTS 0
Your Comment...