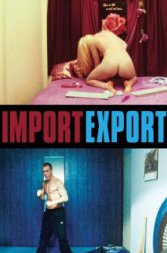 Import Export
Austria, France, Germany, 2007, 135 minutes, SD Drama, Arthouse
There's so much to admire yet also much to abhor in this movie by director Ulrich Seidl who's known for documentaries and films with frank and direct dialogues.  The scenes where Olga is seen observing the girls for an online porn site were quite vulgar and took quite a couple of minutes that at times, women may find it quite degrading although it's understandable that it's showing a dark reality where such things are concerned.  Viewers witness the lives of Olga and Pauli, who barely struggle and decides to go to another place; Olga in Austria and Pauli from Austria to Ukraine. The scenes where Olga was seen as housemaid reminds me in a way of the struggles that Filipino overseas workers experience, those who work as domestic helpers in countries abroad like Hongkong, Singapore and the UAE.  However, I wasn't prepared for the next scenes at all, those that were taken in a home for the aged were so affecting and will tug at your hearstrings.  There is a very straightforward manner as elderly people were seen doing their usual routines in the said institution. Depressing and could make some people emotional, too. So, while the film is all about the quest to end poverty and the quest for a better life of two people,  it's also more or less a peek into the world of old people in a retirement home as well as a peek into the lives of those in the workforce, like cleaners and housemaids.   This film is very intense, compelling and disturbingly real! Definitely a must-wtach!
Like this Review?
Write your own review?
DooVOTE
Not for me
Like this Review?
Write your own review?
COMMENTS 0
Your Comment...