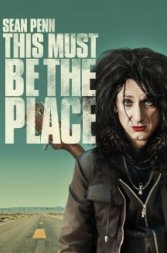 This Must Be the Place
USA, 2012, 118 minutes Drama, Music, Road Movie
This is the English language debut film of seasoned Italian director Paolo Sorrentino and  its' surprisingly quirky yet moving at the same time!  Sean Penn as the fading rock star Cheyenne was a stand-out for the great way that he portrayed the character. Cheyenne looks alienated,somber and with no real purpose for the future although he seems to be comfortably living with his wife Jane who is a firewoman,  played by Frances McDormand.  It's quite appaling yet amusing how Cheyenne and Jane are opposites where it concerns personality, since while the former seems arthritic and fed up with life the latter has a very sunny character, a talker and very physically active.  It's nice to see though that there's a shift in the character of Cheyenne as the movie progresses and the dead pan humor in certain scenes are always a  great respite. Cinematography was very well-achieved and the supporting cast are very commendable such as Eve Hewson, the teener that Cheyenne hangs out with. It's a sort of light and heartwarming kind of movie but also with very deep meanings and messages for the viewers such as the the virtue of  acceptance, making amends and letting go of what was. The musical scoring was superb!  You should better check this out!
Like this Review?
Write your own review?
DooVOTE
Not for me
Like this Review?
Write your own review?
COMMENTS 0
Your Comment...