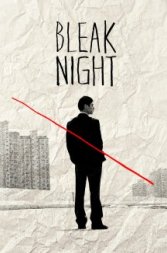 An intensely moving look at friendship and its deterioration, “Bleak Night” carries a weight of authenticity that makes it relentlessly moving and captivating, and is an astonishing first feature film from director Yoon Sung-Hyun.

“Bleak Night” begins with a harsh shot of violence, that’s cut short as we move to present day, where a father (quietly played by Jo Sung-ha) is grieving his dead son. Ki-tae (the remarkable Je-hoon Lee) is the son, and one of three boys that the film follows in a series of flashbacks. In the present day, we see the father approach the other two boys, Dog-yoon (Jun-young Seo) and Hee-joon (Jun-min Park), to find out what happened to Ki-tae.

The viewer’s main interest, however, is not in figuring out any sort of mystery or who-done-it type death. It is in the dynamics of the relationships, and the subtle steps the narrative takes, between which the boys lose control. Initially, we are shown how cold and merciless Ki-tae can be. Early on we see him intimidate and physically abuse Hee-joon (who goes by the nickname Becky). Minutes later, we are taken to a flashback further in the past, where Ki-tae, Hee-joon and Dog-yoon are joking around, and spending a now-seemingly blissful afternoon together. Ki-tae even sacrifices his chances with a girl in order to maintain Hee-joon’s pride. Later in the film, after Ki-tae has begun his cold vendetta against Hee-joon, Hee-joon refers to his pride as that which keeps him from pandering to Ki-tae. This pride, and the boys’ stronghold on it, leads to various extremities that needn’t have been reached. Ki-tae often seeks redemption from his friends and they refuse to give it to him. The achingly clear conclusion of this film is so well interwoven into this pattern; it makes it seem all the more devastating.

What makes this film special is the brilliance of the timeline. We are taken between present and past, but not even the flashbacks appear in the right order. However, director Yoon Sung-Hyun uses the time-change to perfection, ensuring that both our emotions and understanding develop at the right pace. One of the more painful scenes in the film sees Dog-yoon, often the voice of calm and reason, flatly tell Ki-tae that he is friendless and has no place in this world. We then move to an earlier flashback, where Ki-tae and Dog-yoon are discussing Ki-tae’s more recent move to be a dominating presence in school. Dog-yoon asks: “Is it fun playing the boss with your posse?” to which Ki-tae answers, “Of course, I’m the shit”. Having this small and delicate conversation between the boys placed here is key. Ki-tae’s answer now has a dark sense of irony, since we just saw him at his lowest and most vulnerable.

The acting in this film is impeccable. And Jo Sung-ha as the father moves elegantly through the picture, more as a silent curator to the storyline than a driving force. It’s a calmness necessary to facilitate the slow-burning and subtle developments. Jun-min Park as Becky expertly displays both the awkwardness that allows him to be a target and a shy strength underneath that makes his initial friendship with Ki-tae believable. Je-hoon Lee delivers a beguiling performance as Ki-tae, with the ability to present the whole spectrum of emotions in short outbursts. The real revelation is in the character development of Jun-young Seo’s Dog-yoon. Initially appearing as the passive member of the group, his role develops and we see him as the arbiter of sense throughout the latter part of the film. He is suddenly looked to for clarity and answers. Through these performances, the subtleties of the storytelling come to life, and make this a fascinating look at human nature in a bleak scenario. A real joy to watch, it will stay with you well beyond its 2 hour running time.