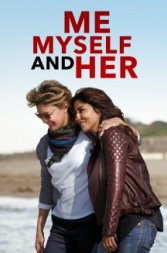 Me, Myself and Her
Italy, 2015, 97 minutes Romance, Comedy, LGBT
I find this film  a unique character study of two persons, Federica and Marina who are both in love and devoted to each other and have been together for about 5 years already.  Marina who's an actress has a rather strong personality while Federica, an architect, while gentle and timid at times is quite conflicted regarding certain issues. Not surprising,  the latter soon falls into the abyss of infidelity but Marina, strong as she is, holds her ground and life somehow continues albeit depressingly, as revealed in that scene where she' s caught in traffic and the incessant honking she makes becomes the medium for her to break down in desperation.  There's a happy ending, thank goodness but I'd say of the two,  Marina seems to be the more logical and level-headed one and frankly, I wasn' t so sold out with what Federica has to say but suffice to say that "love conquers all". Worth checking out!
Like this Review?
Write your own review?
DooVOTE
Not for me
Like this Review?
Write your own review?
COMMENTS 0
Your Comment...
LIKES 1
Lorlor87
Lorlor87