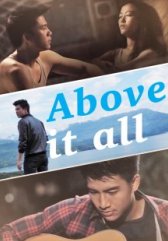 Noy, Above It All
Lao People's Democratic Republic, 2016, 90 minutes, HD Drama, LGBT, Asian
This movie gives some contrasting views as observed by the words that the father of the gay Noy said during that scene where Noy comes home with his shirt splattered with blood from the car accident victims.  It's an interesting scene as it paved the way for Noy to tell his father that he is gay but it's also quite disturbing because the father mentions that he should go on and marry the girl even if he doesn't love her as having kids could help him become a man.  The acting portrayals are quite commendable but while Noy the closeted gay was okay it was Noy the young woman who works at the restaurant and her friend, the brother of the gay Noy who, for me, stood out from among the actors. It also helps that the younger brother was a balladeer, he was quite expressive to say the least.  An interesting film by Anysay Keola that you should check out!
Like this Review?
Write your own review?
Add to List
Not for me
Like this Review?
Write your own review?
COMMENTS 0
Your Comment...
LIKES 1
snakeeyes
snakeeyes