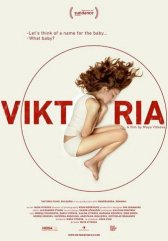 Viktoria
Bulgaria, 2014, 155 minutes Drama
I found this a quite engrossing film debut from director Maya Vitkova and clearly so, because it tackles discord, anger and indifference towards your very kin and it's a cycle that repeats itself: from grandmother, to daughter to granddaughter. The very idea of Viktoria having been born with no belly button is clear in itself that there is no sense of connection between Boryana and the baby on her womb, an offspring she strongliy resents, doing all the bad things like smoking and drinking alcohol just to stop the pregnancy.  Her child being unwanted by her has a strong reason and it roots back to mother-daughter relationship.  Noticeable that Boryana's scenes with her mother were mostly without dialogues and yet viewers can sense an intense tension between the two. This ripples down to the child Viktoria when she was born, who ironically receives special treatment from the government for her special condition.  The relationship between Boryana and the doctor who's the father of Viktoria was also quite queer and depressing. Cinematography was commendable and Irmena Chichikova as Boryana was a scene-stealer with facial attributes that suited well to the character. Those unmistakable large eyebags, sunken cheeks and with an expression that shows a woman unhappy with her life seems to gel well altogether.  This is a movie that is worth watching as it will make viewers pay homage to their mother, reconnect with them and be able to reassess their own relationships with the woman who brought them into this world.
Like this Review?
Write your own review?
DooVOTE
Not for me
Like this Review?
Write your own review?
COMMENTS 0
Your Comment...