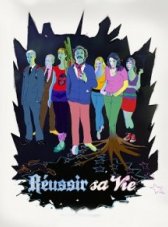 Reussir Sa Vie
France, 2012, 84 minutes Comedy, Compilation, Arthouse
Hilarious in an offbeat and surreal way! This movie written and directed by Benoit Forgeard is about an underground film maker who's having trouble finishing his film and in the process gets paid a visit from characters of his past films. Of the three stories shown, I was especially drawn to Anti-Virus, for the vivid colors and flamboyant costumes and production design, plus of course the techie stuff.  Check out this film and get to know how the puzzle of a film was all pieced together.
Like this Review?
Write your own review?
Add to List
Not for me
Like this Review?
Write your own review?
COMMENTS 0
Your Comment...