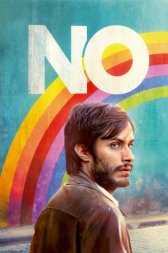 No
Chile, France, USA, 2012, 118 minutes Drama, History
No, directed by Pablo Larraín (as part of his trilogy relating to the Chilean dictatorship between 1973 and 1988), is a Chilean film, and international co-production, set in Chile of 1988, about a referendum over whether General Augusto Pinochet, a dictator since Chile’s coup-de-etat in 1973, should stay in power for another 8 years, and the ‘No’ Campaign using advertising tactics in order to vote against it.

No follows the docudrama genre, such as something like Zero Dark Thirty and Argo (which is coincidentally very similar in concept and themes, even released the same year). According to Jonathan Romney in his review of the film, ‘it essentially belongs to the same 'how-it-happened'/ 'how-they-pulled-it-off'’ to how Hollywood would approach those films. The look of the film feels like documentary footage from the 80s, and I love the techniques they used to create the look of the film, which matches up with the original footage of the adverts (all REAL footage). A high quality image of today just wouldn't match-up with the original footage from the 80s, and would feel out of place. They actually had to make a camera that could re-create the technology of that time, and I admire that aspect of their production.

The film itself attempts to explore the complexities of politics, and the use in advertising for political campaigns. The government tries to fake the idea of freedom of speech, and the No campaign was trying to make it seem like the Chilean people had a voice, when in reality it was only to make it seem like people were in favour of the dictatorship. The second campaign, people didn't even bother, because they knew that last time was rigged (people who weren't even alive voted in favour of Pinochet, and men in the military were allowed to vote twice), so they were at a loss. Rene just figured that the 'Yes' campaign was going to take the advertising approach anyway, and by using the advertising techniques, they win at their own game. Pinochet imposes a strong capitalist system, yet ironically a capitalist approach is used to defeat him. Despite the ‘No’ campaign winning, not many changes in the country have occurred since then, and some of the old ideals still remained. That's why the film works on ambiguity and ends on a split note. While the film provides a historical context of a country not many people are familiar with, its overall themes are universal and can be applied to today’s context, especially that of the media and advertising manipulating the truth.

It deals with a difficult time in Chile, and the people who lived in that period might find the film difficult to watch. However, the people who laughed at the cheesy nature of the adverts most likely didn't live during that time and don't understand how much pressure there was to win. That's probably why the film received mixed reviews in Chile at the time of its release. Oddly enough, this was what the director expected the reaction to be anyway.